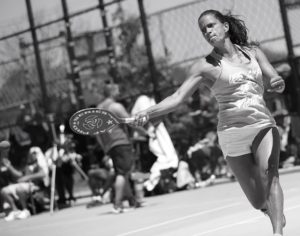 In just two short years, Liz Colon has made an amazing impact on the sport of paddleball. Not only is she one of the top women players, but more importantly, she has shown a true passion for promoting the game and has big hope for its future growth. Her most visible impact is her live streaming of one-wall games on her Facebook “Liz Live” page. But her biggest contribution is as a loving, caring, helping friend to everyone she touches in the paddleball community, and the paddleball world loves Liz! Her close friend, Maritza Alicea tells us, “She is a genuine loving person with an easy smile who will help anyone who really needs it…… as long as you ask her by text, she hates talking on the phone!” So, you heard it here, text her, do not call!

Liz was born and raised in the Fordham Road/Kingsbridge section of the Bronx. She is the youngest of four children, with two brothers and a sister. As with many paddleball players, she started in handball, playing at Aqueduct Park under the tutelage of her long time mentor, Master Web. Through her hard work and passion for handball, Liz developed a strong game and became one of the best women players at Aqueduct. As we now know, Liz is driven to be the best she can be at whatever she puts her mind to. She knew that in order to move to the next level, she needed to play with stiffer competition. So she packed her bag and went out looking for better games. Her first stop was St. James Park, not far from Aqueduct, and later on to West 4th Street. Liz became an excellent player and though she didn’t compete in handball tournaments, she dished out plenty of #PowPows!

Liz’s paddleball story really started two years ago when she started playing it consistently at Zerega Indoor and Marathon Park and it didn’t take long for her to become one of the top women players in the game. Undoubtedly, her experience in handball and racquetball, as well as her dedication and natural athletic ability, were all important factors in her rapid ascension. She is a dynamic right-handed competitor with one of the most powerful forehands in the ladies division. Liz is like a lioness stalking her prey, patiently waiting for the perfect opportunity to attack and put her opponent on the defense. When she gets a set-up, her eyes look like they’re about to pop out of their sockets and she goes into BEAST mode on the poor ball! Her favorite shot? But of course, “Drive shot to the body. I like hitting the ball hard, it feels good! I love the sound of the ball slamming against the wall.” And like every successful athlete with the drive to rise to the top, she works hard, playing 2 to 3 times a week to improve her game. She says it’s a great workout and a great way to let off steam! How does she describe her game? “A work in progress. LOL. I’m still learning. Every time I play, I learn something new and I try to focus on improving that one thing!” Ladies of paddleball, are you listening?

Liz is not only an excellent player and a helpful, popular friend to the paddleball community, but also a very thoughtful person who has many insights about the game and how it can flourish. What does she think the sport needs for it to grow? “I have so much hope for this game and I only wish to see it continue to grow. We need more people who give of themselves selflessly to make great events and promote the game. Charlene Gilio is a great example, constantly organizing games throughout the year and coming up with fresh new ideas for events that keep people interested and wanting to come back. People like Kathy Guinan, Mike Waters and Cindy Figueroa, who always offer themselves in any capacity just for the love of the game, GENUINELY! It’s heartwarming. And of course people such as you, Mike, who dedicate their time to introducing and teaching the sport to our youth and keeping up with it.”

What advice does Liz have for her peers? “Appreciate the time that others dedicate to putting tournaments together. RESPECT the time they are taking away from their lives/families to put on these events, while looking at the bigger picture. Also players should think about not just what the event can do for you, but what your contribution and participation can do for the event. I know lots of players choose not to participate because they feel they have no chance at winning. Imagine if everyone thought that way, we’d never have tournaments! I enjoy playing and participating in whichever events I can, just to add to the pot! I’d like to see some of the Pro/A players go out of their comfort zone and pick a player whose skill level is a little less than theirs for an open tournament, just to make things interesting and give more people the opportunity to win.

Is there something she would like to change about the sport? “I’d like to make it more difficult for people who behave poorly during the events. Like with any other sport, there are immediate consequences (technical fouls accompanied by fines, suspensions, etc.), make these punishments on-the-spot and stay consistent with it so players are not so quick to argue with a ref, lines-person, spectator or each other. That type of behavior is not tolerated anywhere else and should not be tolerated here either.” This writer agrees with Liz 100% and this is something the PFA has organized with the help of other tournament directors and put in place during the past year.

Liz says the sport of paddleball is very dynamic, no two players play the same way. She loves watching and playing against all the different styles of play. But when we asked her who is her favorite player, we got more than we asked for. “OMG there’s so many. Of course Robert Sostre and his ability to pick and place almost any shot he wants. Maira Rosario-Ramos as well, she’s aggressive and can kill the ball from anywhere on the court and has excellent court awareness. My mixed partner Dave Blatt and his aggressiveness and quick hands. Carlos Espinal and his shot arsenal is ridiculous, spiking, powering the ball from anywhere on the court, it’s just insane. But my new favorite is newcomer Suly Ruiz. She’s very smart with her shot placement and has carried over her handball skills right to the paddleball side. It’s amazing how quickly she’s advanced. I’ve learned so much from each of these players and so many more.” You would think with all these paddleball greats that she marvels, one of them would be her sports hero, but no, it’s Michael Jordan. “Whenever he played I felt like I was witnessing greatness. He’s a true example of a “GIFTED” person.”

If you would like Liz to expound on these insights, or for her to help out in any way, just ask her, but don’t call her, TEXT! SHE HATES TALKING ON THE PHONE! 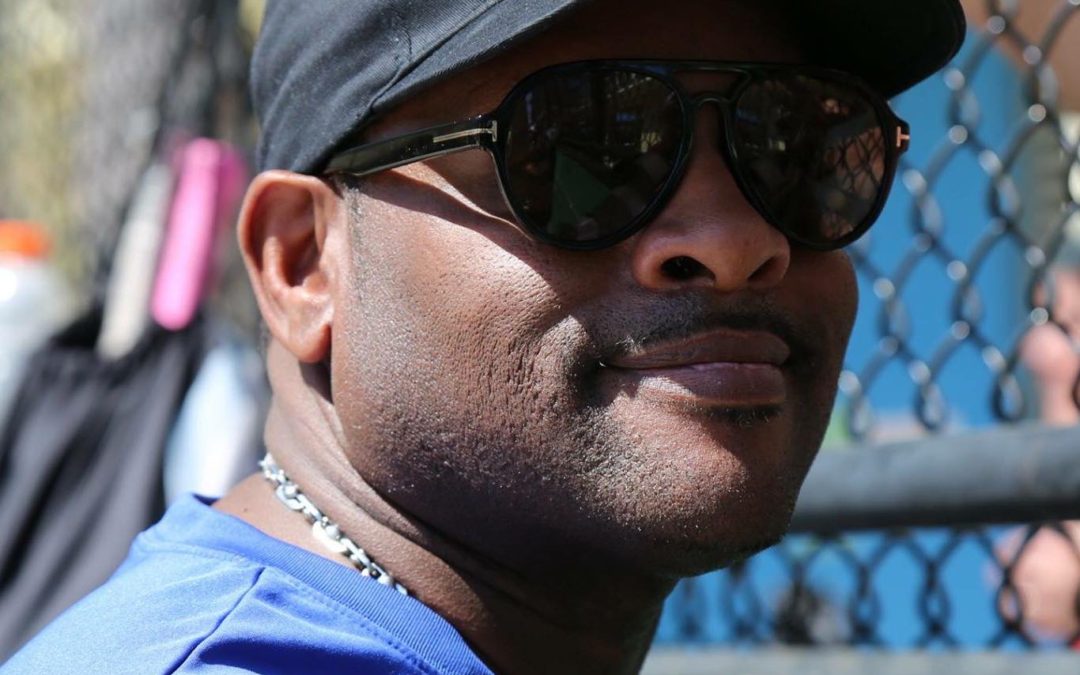 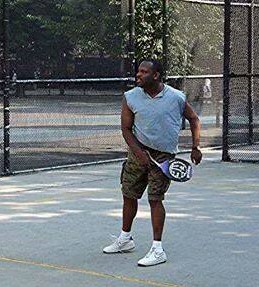