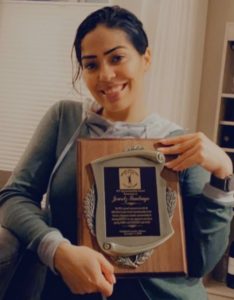 “When you stop fighting things and just live, breathe, and try your best to treat people right, life just flows.  It’s that simple.”  – AnonymousThis quote, one of her favorites, aptly captures Jewelz Santiago.  When you look at her life, it seems that Jewelz is just too good to be true.  But this is really her: magnanimous, kind, dedicated, hard-working, humble, an animal lover, a physical fitness gym rat, a rags-to-riches success story and a loved-by-all true sportsperson.  Yes, and those that know her will attest that it’s all true!

Jewlez is an eighteen-year veteran handball player who started playing paddleball only three years ago and has quickly emerged as one of the top female players in the game. Her life started out in the most humble manner in the Dominican Republic, a beautiful Caribbean nation that shares the island of Hispaniola with Haiti to the west.  Currently 40.4% of the Dominican Republic’s people live in poverty, and 10.4% are in extreme poverty.  Her parents left Jewelz and her siblings when she was five years old seeking to make a better life in the US for their children and they were reunited in the US five years later.  The parents worked hard so that the kids could be provided with the basic essentials for living while enabling them to go to school.  Jewelz persevered and advanced in her education, but never lost sight of her early years.  She “gets up every day and works as if I am still living in the DR waiting for my parents to come get me.”  Her industriousness paid off as she eventually became a successful businesswoman.

When we talk about Jewelz as magnanimous and a sportsperson, she is without peer in the paddleball community.  She has been a significant sponsor in the AF tournaments and the PFA Youth program as well as other paddleball tournaments.  She treats everyone with kindness, her fellow players with respect and is universally well-liked.  This past year she became the first women’s winner of the prestigious Chris Lecakes Sportswoman of the Year award, which was a no-brainer.  Jewelz says this was the most memorable moment in her paddleball career!

As with most paddleball players, she started in handball, partnering for a few years with Suly Ruiz, another ex-handballer who has also since become one of the best women paddleball players.  They won a B doubles and placed high in many other handball tournaments.  She first started playing paddleball when Suly, along with Manny Olmo, encouraged her to try paddleball at Garfield Park in Hollywood.  She loved the game, became hooked, and immediately transitioned to paddleball – her home court is Castle Hill Playground in the Bronx.  Jewelz’ style on the court is strictly offensive, always looking to attack, whether it be to hit a winner, to create a shot that will set herself up or to set up her partner for a good shot.  She likes to mix up her shots with killers, drives and lobs, a shot which she is especially fond of.  She says she loves everything about paddleball, especially the people.  “The welcoming I received when I started was like no other.  The encouragement from everyone, I don’t think there is a better sports community out there.  The love and care is FELT!”  She is a sweetheart but as Suly told us, “She hates soft games when people are not playing hard… or always laughing when playing.  She wants that serious intense game!”  Say, wouldn’t it be awesome if Jewelz and Sully teamed up in tournaments?

We asked Jewelz what she thinks can be done to improve organized paddleball and the PFA in particular and she provided some excellent input.  She would like to see more confident and knowledgeable refereeing and players themselves should do a better job of learning the rules.  The PFA can expand its horizons by enlisting the parents of the Youth Clinic participants to help recruit others and also encourage the students themselves to get their friends involved. Jewelz also had some solid thoughts on promoting the growth of the sport.  One important potential source is the handball community, which as we know is quite large.  Approaching them with paddles and trying to get them to give it a try is the way she got hooked and an organized effort of this type could certainly get more new paddleball recruits.  Also, approaching the schools that have handball teams and encouraging them to have paddleball options is another great idea.

What is Jewelz’ highlight on the paddleball court?  She cites a mixed doubles tournament victory against the huge favorite Lisa Michaelessi, one of the best of all the women players, a game though that was fraught with arguments.  She said the crowd was amazing and when her team won, it was a great feeling.

Jewlez is a private person, so many of you may not know the information we are about to reveal about Jewelz:  Her favorite color is orange (summer sun), favorite food is seafood, sports heroes are Nadal and Djokovic and she used to play softball and volleyball.  Jewlez’ love of animals can be readily seen with her two dogs, Nela and Daisy.  She loves to cook and considers herself the chef for her family and circle of friends.  Jewelz is a dedicated athlete, spending much time in the gym working out, toning her body and maintaining physical fitness.  And her favorite sport is none other than paddleball!

How can we sum up Jewelz Santiago?  Well, she does it best: “I believe in Kindness. There is no better feeling than when someone is Kind to us without any hidden agenda. Kindness is more contagious than evil.  If only we would spread more of it, the world would be a better place.”

Well Jewelz, the paddleball community is in a better place because of you! 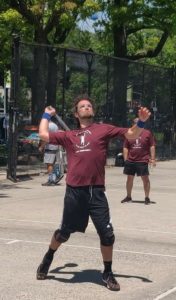 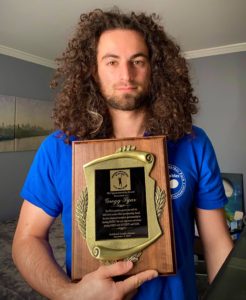