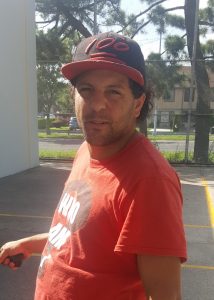 You all know him. He’s played in many tournaments, visited many paddleball parks (usually on his bike) and is forever posting on the Facebook paddleball groups. He is one of the best young players today, very talented and highly motivated to excel. He’s Staten Island’s Sal Coticelli or as he likes to be known, Punchball Legend.

The story of Sal’s paddleball career starts 27 years ago, when he was only 8. He grew up in Brooklyn and first took up the game at the courts of Marine Park where he fought to gain acceptance with the adult players. He managed to get into their games by age 10 and by his mid teens, he was highly competitive, eventually moving on to the courts at Coney Island. Simultaneously, he developed into a top young handball player, winning many tournaments and drawing numerous accolades, particularly in high school. It was through handball, when he developed a nasty bone bruise and could only punch the ball that the “Punchball” nickname developed. He continues to play competitive handball today. In recent years, he moved to Staten Island and is now a fixture at the Midland Beach paddleball games.

Sal works very hard honing his skills, playing or practicing often 5 days a week. He has all the tools: power, terrific low serve, foot speed, an amazing left hand (which he developed during two injuries to his right arm) and wonderful paddleball instincts. His favorite shots are the killer in the right corner and his behind-the-back left side serve, both of which I can tell you are devastating. His paddleball role model is Robert Sostre and Sal actually studies his videos to help him improve. He also displays a cool demeanor on the court, never engaging in arguments.

Sal has extreme confidence in his paddleball skills, and he surely doesn’t hide it. But there is another side to him. If you are his Facebook friend, and almost everyone in paddleball is, you saw last spring how distraught he was when his beloved golden retriever, Mariah, was ill and eventually had to be put to sleep. We all felt so bad. We learned from FB he now has a new adorable golden puppy, Mandy. Sal has also done some good work with kids, whom he recognizes represent the future of paddleball.

Sal’s persona is dominated by an incredible drive for excellence in paddleball. He pushes himself as hard as possible to achieve his goal and he has advanced his game to a very high level, but he feels there is not universal acknowledgement of this. He truly wants the paddleball world to recognize his ability and he will continue to push on until he gets there. 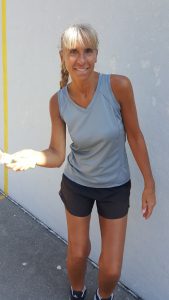 Staten Island has a secret it has hidden from the paddleball world for decades. It’s Nancy McKeon. She is far and away the best woman paddleball player in Staten Island and every player on the Island knows it. We all believe she could compete successfully against any of the outstanding women players in the game today. Never heard of her? Well that’s understandable because Nancy almost never plays or competes off Staten Island.

Nancy has been playing paddleball for 37 years and presently plays 3-4 times/week at the Midland Beach courts. Her interest was originally sparked by her future husband, Kevin McKeon, who is also one of the top players on the Island. She is the stalwart player for the weekday Island group and also plays with the weekend group. Nancy is always competing against skilled men players and “holding her own” is a gross understatement. She is one of the best right-side righty players on Staten Island, bar none. Nancy rarely makes an unforced error, is a supreme defensive player and almost always hits the ball to the right spot. She makes incredible gets, has a terrific left hand and has deadly put-aways, especially killers in the left corner. Nancy thrives on the competition and plays with that never-give-up attitude, while almost never arguing and always playing fair. And how about this: She uses a wooden paddle! And she plays almost exclusively small ball.

I asked Nancy if she has ever wanted to play competitively against the top players in the city to achieve recognition. She replied that she just loves paddleball, it gets her up in the morning, keeps her in shape and she enjoys the camaraderie of the players. That’s all she needs and it’s what drives her. She says she doesn’t have any desire to make a name for herself.

What about that wooden paddle? It is really a club, very heavy, completely covered with tape and get this: She has been using the same paddle for 37 years. I don’t mean the same model, but the same piece of wood! She said she tried the modern paddles, but never could find one that gave her the hit she gets with her wooden one.

Why small ball? Big ball is reputed to be the better choice for women because it’s a softer game. The answer is obvious: Small ball is the only ball that is played on the Island. She has played big ball at Garfield Park in Florida a few times and fared well. Her prowess at small ball is a further testimonial to her skill level.

Another indication of her paddleball proficiency and competitiveness is her surprising answer to my question as to whether she had ever experienced any resentment to her playing in “mens” games. She said she never had, not even way back decades ago when women were not as well accepted in men’s sports as they are today.

So there you have it. Staten Island’s Nancy McKeon. Unfortunately if you want to see her in action, or play against her, you must make the trek over the Verrazano Bridge ($17 toll unless you have EZ Pass!) But it will be well worth it! 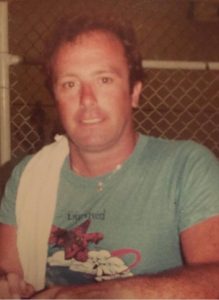 Jack Moriarty Father, Husband & Paddleball Player During the summer of 1976, Jack fell in love with the game of paddleball.. a late starter compared to others, at the age of 34. When the summer ended and he learned that the only way to play in the winter was outdoors, in the cold, snowy, New York weather, Jack, as innovative as he always was, decided to build indoor paddleball courts and that is how it all started. Bronx Indoor Paddleball later known as Zerega was born. With his own hands and the love of the game, Jack and his partner Frank created this labor of love. The courts’ opening even made the 6 o’clock news on CBS. After 2 years, the business was sold to Sy Lane however Jack’s love for the game continued for his entire life and it was a family love affair that went on throughout the years even when he moved south in 1988 playing at all the Florida hotspots.. A right-sided, admittedly passionate, B player, Jack was instrumental in getting one wall courts built at his neighborhood park and ran a Pro Shop adjacent to the Garfield St courts in Hollywood Bch, FL in his later years. And when it came time for him to leave us, he had his paddle with him so he could call “got next” with all the other players that have left us all too soon. He coined the phrase .. “PLAY PADDLEBALL …LOVE LONGER” which still lives on today during his Memorial Tournament every winter at the Hollywood Beach courts. Jack was a true innovator and pioneer of indoor paddleball that took the game to a whole new level. Not a day goes by that he is not missed on & off the court!

As communicated in my earlier Post, below is the PFA players ranking criteria. These are not perfect but we have to get started with something and build on it. We shared our criteria with some of the paddleball directors in the game and they agreed with it. As I mentioned on my previous post, our number one goal is to put in place a process that is fair to EVERYONE and helps us organize the sport and move it forward. Again, this criteria we have adapted is not meant to be Paddleball Global Ranking System. But we hope with tournament directors, and others, constructive input it can become the official Paddleball ranking system. The criteria applies to both SMALL & BIG BALL. The ‘A’ list below is only for SMALL ball. We will be publishing the Big ball ‘A’ list next week.

Out of respect for the hard work and dedication that it takes to become an “A” player, the PFA’s position will be that once a player attains an “A” ranking, they will keep that ranking. However, we recognize that skill levels may decline and want to afford players a chance to compete against fair competition when possible. For that reason, we are adopting the following rule with respect to “A” player rankings.

Players ‘B’ to ‘A’ criteria – Any combination of the below will automatically earn a player an A ranking.

Tournament seeding will be based on calendar year results

Small Ball ‘A’ Players Ranking below(List will b adjusted as more players are identified, I’m sure I missed players that should be included):