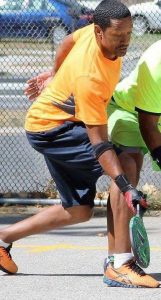 Jay reminds me more of a power forward basketball player instead of a paddleball player. He is a hard hitting right handed paddleball player from the Bronx with a ton of potential to become one of the sport’s elite player. He started playing the game back in the 80s but really has been playing consistently the past 2 years. He started playing the game at the courts on P.S 86 on Riverside Drive in Manhattan and Central Park at the age of about 15 years old. He then took his game in search of tougher competition to St. James park in the Bronx.

His Mom & Dad are his favorite players, “Just watching the enjoyment of the competitiveness between them two” inspired him to compete at a high level in sports. He loves the game of paddleball, likes the hustle , the atmosphere, the different type of style of people’s games. He said the competition of the game is what attracted him to the sport, “Competition just love it..”. He has won a few tournaments the past two years including the PFA 1st Winter Open Restricted Doubles with Joey Vega. He also qualified to the PFA 1st Summer Doubles Invitational Classic at Orchard Beach.
*
He said “Sportsmanship goes a long way with me..” and feels is one of the things that will help grow the sport and make it more enjoyable to play. His advice to his paddleball peers? “they probably already know this “HAVE FUN”!!” He thinks the game is in good shape but reminds everyone to ” Just be fare”.
*
He concluded the interview with..
“WHO GOT NEXT?.. that’s all..I’m coming!!!”
*
You are definitely coming Jay, stay focused and keep working hard. You Got Next!
*
CONGRATULATION Jay!