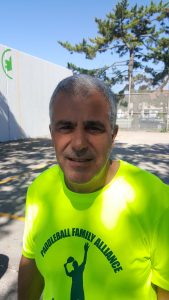 By now, most of you know the miraculous, heroic story of Tony Cascella, the focus of the “Welcome Back Tony” tournament held last September at Staten Island. In January, 2016 he was stricken with sudden cardiac arrest while playing paddleball in Clifton, NJ. His life was over. But Keith Jackson, Mitch Goldberg and Mitch Resnick wouldn’t allow it to happen. They brought him back using their CPR skills, assisted by a defibrillator. Today Tony is in good health, once again playing the game he loves at a high level.

Tony’s real life and paddleball career may not be as well known. He is a native Staten Islander and a retired NYPD detective. Inspired by his brother Michael, he started playing back in 1981 at Staten Island’s Egbert I.S. playground. He has played many sports, but paddleball is his first love and he has become a lifer. Tony’s athletic ability and determination have enabled him to become one of the top players in Staten Island. He is a right handed player with a deadly left who is one of the best right side righties in the game, possessing terrific angle kill shots with either hand. When teamed with a lefty, Tony is an outstanding left side player as well. He is also an excellent paddleball referee, always willing to help in tournaments.

Tony’s advice to other players is to “Play Hard, Play Fair and remember, it’s only a game!” This is exactly what we would expect from Tony, because he has always been a tough and fair competitor, while respecting his partner and opponents. It has served him well, earning him widespread admiration. Tony is also a big proponent of the PFA and the work it has done to assimilate the paddleball community and encourage the resurgence of the youth in the game.