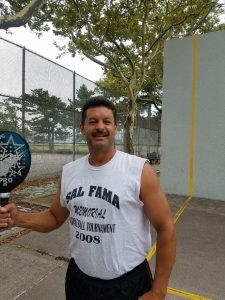 I guarantee that you will not find another person in the world of paddleball like Eddie Montañez. Eddie is a very talented player with amazing skills who plays the game strictly to have fun and truly does not care if he wins or loses. He is a hard hitter, fast and accurate, with terrific kill shots. But his favorite shots are his ultra-sharp cuts, which he can curve left, right and straight up and down. He also has perfected behind-the-back and through-the-legs shots. He will use these “trick” shots at any time during a rally, earning him the well deserved nickname “Sideshow.”

He started playing the game 38 years ago when he spotted his future wife, Dixie, playing paddleball in Sunset Park, Brooklyn. He decided that the best way to meet her was to play in her game. It worked! He has been playing ever since, mostly twice a week, the past 13 years in Midland Beach, Staten Island.

The sports story of Eddie Montañez goes well beyond paddleball. He a great athlete and a renowned softball player. During the summer, he plays every week in the Bensonhurst Park Softball League, pitching and playing the infield. He has won multiple MVP’s, Cy Young awards, hit hundreds of homers and was inducted into the league’s Hall of Fame!

But the most outstanding part of Eddie’s life does not involve sports. He is a hero! Eddie and his family live along the beachfront in Staten Island, which was one of the hardest hit areas by Hurricane Sandy. During and after the storm, though his house was partially submerged, Eddie risked his life, along with his son Eddie, to save the lives of two trapped elderly neighbors along with their two dogs. He did this while bleeding because one of the pooches bit him! He also rescued two more people from their marooned van and lodged them in his house for several days. We are all proud of him for his bravery and caring!

But back to paddleball. I’m sure many of you were shuddering as you read about Eddie’s trick shot game, because you are competitive and want to play at 100% at all times. But who is to say that Eddie’s approach to the game is not the best one? His advice to all players: “Paddleball is a wonderful sport. Don’t take it so seriously. Have fun playing and you’ll love the game!”