Let’s go back to 1971 when paddleball was starting to take off at the city playgrounds, up in the Catskills, in Florida and the many beach clubs in the NYC area. It was played with wooden paddles and a “555” handball. The man who was at the forefront of the flourishing game was Howie Hammer. He and his partner John Bruschi unquestionably comprised the best doubles team in the game, having won the recent American Paddleball Association championship. Besides being a great player, Howie truly wanted to help the game grow. He wrote a book, taught the game in college, and during this summer he assembled a touring crew of top players. The group included John, Steve Rothfeld and Dennis Majorino. They visited the beach clubs and other venues, conducting mini-clinics and playing exhibitions against the best of the local players. On July 25th, the show came to Brooklyn’s Brighton Beach Baths (BBB), which contained Garber Stadium. I was there and what happened was amazing.

BBB had many fine wooden wall courts plus one showcase court in Garber Stadium. The bleacher seats that surrounded the court could accommodate perhaps a thousand people, and they were packed that day. Though the Garber court was a true-bounce, well maintained court, it was unlike any other paddleball court in that the wooden wall was super live and very prone to killers staying down.

The program started with a match between Steve Rothfeld and Dennis Majorino vs. two BBB kids, Anthony Cirillo, age 16, and Hank Grassi Jr.,15. Most of you remember or have heard about Steve, who went on to become one of the best players in the game. He was in his early twenties at the time and already a terrific player. Dennis, also in his twenties, was every bit Steve’s equal. Unfortunately, he did not stay with the game and sadly has since passed away, far too young. Who would have thought that the two kids could even give Steve and Dennis a game? Well, they gave them all they could handle in a thrilling match, finally going down 21-17. The crowd loved it!

But that just whetted the appetite for the fans for the excitement that was to come. The feature match pitted Howie and John against Peter Grassi, Hankie’s 17 year old brother, and their Dad, Hank Grassi Sr., who was 45 at the time. It’s ironic that in the present paddleball era, 45 is actually young, but back in those days, Hank Sr., who was a very good, steady player, was considered old. Peter was a kid, inexperienced as far as playing top competition and an unknown in the paddleball world. Howie and John were in their early 30s, highly skilled, in their prime – the very best in the game.

The game started off as expected, with Howie and John taking an 8-3 lead. They were playing well and Peter was cold. The champs seemed destined to an easy win. Peter related to me what occurred next. Hank told Peter, who was playing the left side, that they should switch sides. Peter “insubordinated” his Dad and told him “Absolutely not!” At the same time, Peter, who was accustomed to playing shirtless and had been wearing a borrowed jersey, decided to toss the shirt. Why had he been wearing it? Peter told me that prior to the game, Howie had asked him to wear a shirt to add “class” to the game. From that point on, Peter caught fire with an incredible offensive display of killers. He was literally unstoppable, in an unconscious zone. By one account, he hit 17 kill shots total for the game! They beat the best team in paddleball 21-12!

How could this happen? In retrospect, Peter and Hank had a home court advantage. They were accustomed to this uniquely live court and Howie and John were not. I recall that the following year, the APA tournament was held at BBB, which Howie and John won, the final match was not played at Garber, but on one of the side courts. I believe that Howie requested this. Another factor in the Grassi win was the vocal support of the home crowd. But the most significant reason was that Peter, despite his youth and inexperience in top competition, was a terrific, super-confident, steady and aggressive offensive player. Perhaps he was too young to get nervous and become overwhelmed by the event. He recalled that he truly believed he was going to win and even told this to a friend before the game. I’m certain Howie and John underestimated Peter’s ability.

Immediately after the game Howie grabbed the megaphone and started the paddleball clinic. To paraphrase his first line: “I think I’m going to let Peter run the clinic!”

Who is Peter Grassi? Peter started playing paddleball at age 10 at the Brooklyn’s Raven Hall and then Washington Baths. When these beach clubs closed, he moved on with his family to Brighton Beach Baths and he absolutely loved it. Except for playing some in Manhattan Beach during the 2 month off-season (BBB was open 10 months), he never traveled to play among the other players in the city. He did play against many fine players at BBB and was always one of the best. Peter is probably the only player to ever use the Knight Official Tournament Paddle, which he originally bought from a street vendor. One story he related to me was about the day Victor Niederhoffer came to the beach club to play paddleball and he challenged Peter to a singles game, spotting him 5 points in a 25 point game. Peter beat him by 6 points, probably enabling some fellow BBB’ers to win some wagers. (Peter did not bet!) Niederhoffer at the time was the number one squash player in the US and also the former paddleball singles and doubles champ. (You can look it up!) When the beach club closed in 1997, Peter pretty much stopped playing paddleball.

July 25th, 1971 was a great day for paddleball. Fortunately, in addition to the memories, we have some terrific photos. Be sure to check them out! 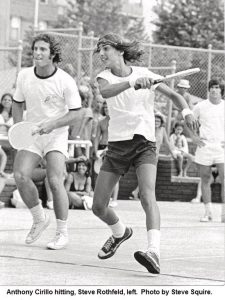 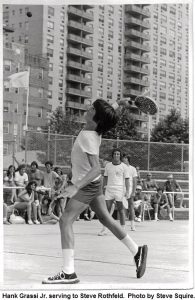 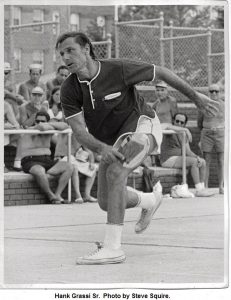 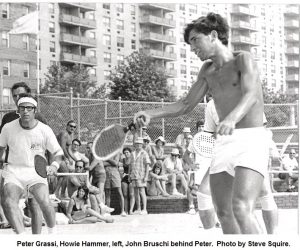 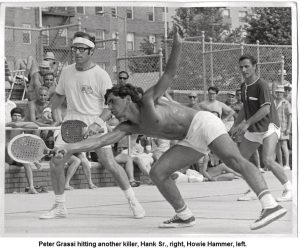