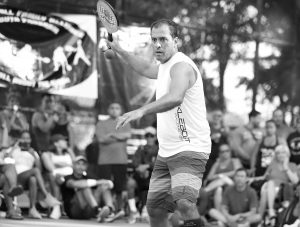 Who is the Greatest of All Time? There have been many great paddleball champions in its history, but the person who ascends to the top of most lists is the Iceman, Robert Sostre. His championships are too numerous to mention, but perhaps most impressive is his longevity at the
top of the game, starting in the mid-1980s through to today. That encompasses 4 decades, going on 5!

He started playing 35 years ago at a very young age in the Bronx at the Yankee Stadium and Van Cortlandt Park courts, inspired and tutored by his older sister, Lily. After playing with her friends, she spent hours and hours hitting with her little brother, soon realizing that he was a natural at the sport, and the creation of a champion had begun. He continued his development by playing park pick-up games every day and practicing tirelessly by himself to develop the large array of shots that are now integral to his game.

Robert is an offensive machine, always attacking the wall and spreading killers and passing shots from anywhere in the court. His favorite shot is the short-hop, which he usually rolls out. He is also an exceptional defensive player, with the uncanny ability to anticipate his opponent’s next shot. His opposite hand (left) is so strong, it is almost as good as his right. He attributes his left hand prowess to the fact that he actually throws with his left (he was a southpaw pitcher), plus long, hard practice time.

Robert is not only a great small and big ball paddleball player, but is a champion in 1-wall handball and one and 3-wall racquetball, having won multiple national titles in these sports. He also excels in three and 4-wall handball, 4-wall racquetball and paddleball, paddle tennis and has played baseball, softball, basketball, pool and table tennis. He was inducted into the outdoor racquetball (WOR) Hall Fame, and the honor that perhaps he is most proud of, the Dewitt Clinton High School Hall of Notable Alumni. Does anyone think he won’t make it to the PFA Paddleball Hall of Fame?

In 2007-8, Robert met a new challenge, tearing both his Achilles tendons within 8 months of each other. Not many athletes come back strong from this injury in one foot, much less, both. But through intense physical therapy and hard work, the Iceman came back after 2 years, playing just like he did prior to the injuries. Robert now says that the recovery was like learning how to walk again and these were the worst two years of his life.

What about Robert’s family? His sister Lily has been his mentor all his life, spurring him and guiding him to success. His late father Jimmy was an outstanding baseball player who almost made it to the pros. His Mom, Delia, get this, has never seen him play live, because she is afraid he will get hurt, but she is the keeper of all his trophies!

Robert’s advice to aspiring tournament players is to play against better players, practice by yourself, hitting as many different shots as possible and compete in as many tournaments as you can, because it’s much different than playing regular pick-up games. Sounds like good advice, Iceman.

Robert Sostre, the Iceman, is one of the true stars of paddleball. A very humble individual and a GENTLEMAN on & off the courts. You can find lots of information on his career, as well as many videos of him playing, all on the Internet. And, if you’ve never seen him play in person, don’t miss out!