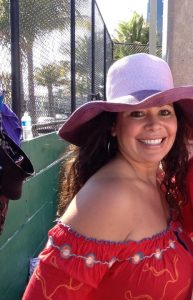 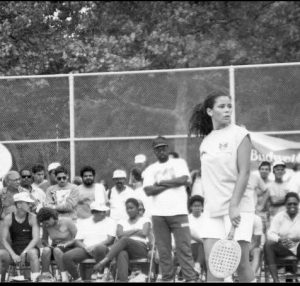 When Mike Melendez asked me to write a profile of Lisa Michaelessi, I said that I was not familiar with her. Mike replied, “What!! you don’t know Lisa? She was a top player in the ladies division back in the 80s and 90s….one of the best women players, bar none!” Well, though I have been involved in paddleball for over 50 years, for most of the last several decades, I’ve been insulated from the paddleball world outside of my home parks. So I needed to find out who is this Lisa Michaelessi, apparently a great player that I knew nothing about. A little Facebook search yielded a telling comment from Donnie Ciaffone: “Lisa Michaelessi, in my opinion, the best female southpaw in the Game.” I went on to find out that she is a champion, having won many women’s and mixed doubles tournaments, mostly with the likes of Kathy Guinan and Robert Sostre. Not bad! And, she’s still winning tournaments.

Lisa’s paddleball career started unconventionally. Because paddleball is a “city” game, not an elite club sport like tennis, I would venture to say most of us picked up the game on our own, usually not until adulthood. We were attracted to it because it is readily available, inexpensive and a cool way to exercise and hang out with our friends. We never had lessons! But Lisa started at age 5, encouraged and taught by her parents who were dedicated players at Marathon Park. However, it’s been my observation that terrific young paddleball players invariably fail to emerge as the stars we think they can be. A kid starts out playing the game, becomes a prodigy and looks like he or she will eventually become the greatest of all time, but then as a teenager, discovers boys or girls, tennis or other interests and paddleball goes down the tubes. Mike’s Kids Clinics is a heroic effort to reverse this trend and we all are hoping for its continued success. But getting back to Lisa, this, happily for our beloved sport, was not the case with her. She loved the game and stuck with it! Her late father, Charlie, became her mentor, teaching her the intricacies of the game, how to control the play from the right side and even had her study the top lefties of the day, like Steve Rothfeld. She became an expert at positioning and learned to play offensively, shooting for her opponent’s weakness, patiently waiting for her shot. Charlie not only taught Lisa the game, but attended all of her tournaments and most importantly, encouraged her to always do her best. Charlie certainly was the right person for the job. He was a paddleball lifer, a top B player back in the day who got turned on to paddleball at Orchard Beach.

By the time she was 13, Lisa’s skills had advanced to the point that she was competing in tournaments and she won her first Budweiser “B” in 1986 – the women’s singles. She continued to excel in paddleball over the years, winning many events. Except for a five year hiatus to raise her two children, she’s continued to play paddleball through to today, eventually switching to big ball, always calling Marathon Park home. She is still one of the top woman players, having won the W.E.p.A. tournament at Bay 8th St. and the Women’s Open Big Blue at Orchard Beach, both during the summer of 2016.

Lisa is an all-around athlete, combining paddleball with tennis, pickleball and softball. In the past, she was a baseball player (that’s baseball, as in hardball, not softball!), having played for 3 years and even tried out for the pros (“A League of their Own”?).

For these paddleball profiles, we ask the subject what is unique or interesting about their lives that the other players may not be aware of. Lisa has been steadfast in her response: “Nothing.” We doubt it, so perhaps others can share something we’d like to hear!