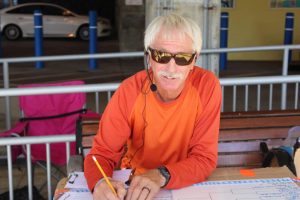 Andy Krosnick Legend of the Game By Bobby Schwarz

Andy Krosnick, legend (and remarkably still among the top players) of the game. Andy Krosnick is one of the most unique player to have ever competed in the game of One Wall Paddleball. In Andy’s case, I have to comment in the past; and strangely enough, I have to speak about the (hard to believe) skills that he possesses to this day.

Growing up in the Rockaways, Andy played all sports. I remember playing on a Police Athletic League Baseball team with Andy. We were probably twelve or thirteen years old. He was as fierce a competitor then as he is now. As Andy grew older he focused most of his athletic attention to Paddleball. At Beach 17th Street, in Far Rockaway, we had our home courts. Those courts were actually a training camp. We had unbelievable games there on a daily basis in the 1970’s, 1980’s and years after. It was like a tournament every day. Andy was that one guy that could drive you crazy. He returned anything and everything you could possibly hit at him. Andy had(and has) two great hands, deceiving power, clutch shot-making ability, a never give up attitude(even if you’re down 19 to 9 in a finals, a game we won) and the ability to make gets that only Andy(The Fly) can.

As most followers of Paddleball know, Andy and I teamed up to be (excuse me if I sound arrogant) the team that all other teams were measured against. Andy was the perfect partner, competitor and sportsman. He was always simply there to cover my sometimes overly aggressive play. He would make ridiculously difficult returns look easy; and he would crash into fences or dive across the pavement (Lenny Dykstra like) to return opponent’s best shots, and ultimately win the point.

Here is a flashback: In one particular tournament our opponent had hit a hard, head high shot up the middle. I decided to leave it for Andy, maybe a mistake. Andy, caught by surprise, in a move any contortionist would be proud of, manages to move his arm behind his back, get his paddle above his shoulders, leap up and forward, and return the ball that was actually past him. The return softly and barely hit the wall, but was a kill shot. I never saw anything like this. Nobody ever did. Probably never will. All in a day’s work for Andy.

Andy was the best paddleball doubles partner I ever played with. We won many, many titles together. His greatness undeniably contributed immensely to my paddleball career.  I can’t thank him enough for his commitment to our team, and our years of friendship. Andy gave and continues to give much of his time to every aspect of the game. He was a co-founder of the Paddleball Players Association. He promoted and directed various tournaments in New York and in Florida. Oh, by the way Andy continued to play and compete in open tournaments. I have been away from the scene for quite some time, but I know that Andy Krosnick and Robert Sostre have won several Open Paddleball Tournaments. Forget age; Andy is ageless! He is an absolute legend. I had the pleasure of competing alongside Andy for many years. Robert Sostre has benefited from teaming up with Andy in the current era of paddleball. The entire paddleball community should thank this great player and great man, Andy Krosnick, The Legend, for just being Andy. Andy, my partner, my friend, I thank you. Let the Legend Live On!