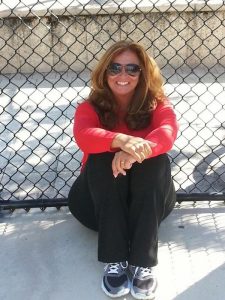 She has done a wonderful job furthering the cause of women’s paddleball. Kim Avena founded the Women’s Empowerment paddleball Alliance three years ago to give the ladies the chance to show off their talents and to compete in tournaments of their own. Until W.E.p.A., the only organized competition available to women in recent years was the “men’s” tournaments. Focusing on big ball, she has organized several very successful women’s and mixed doubles tournaments in NYC and Florida, including a fundraiser for the PFA. W.E.p.A. now has over 600 members, with many men involved too. Under Kim’s leadership, women’s paddleball has grown significantly, with more and more ladies becoming involved in our now flourishing sport.

Kim started playing paddleball at Dyker Beach at age 12 and soon was competing in real games on the “other side.” In a few years, she packed her paddleball bag and moved to the big time games at Bay 8th Street, which is her home park. She also is a regular at Hollywood Beach Garfield Park during the winter months. The move to Bay 8th was spurred by her interest in the many tournaments they conducted, although she couldn’t compete in them because of the demands of her job. Ironically, now that she has the time, she can’t play in the tournaments because of several nagging injuries. She currently is playing twice a week.

Kim has an outstanding game, sparked by two good hands, excellent anticipation and steady play. Her favorite shot is her topspin drop, which is a “heartbreaker” that she executes with either hand. One of her greatest assets on the court is her anticipation, enhanced by studying the angle of her opponent’s paddle during play. Because Kim has not been a tournament player, her skills on the court are not as well known as they would be if she had participated. However, those that have played with and against her over the years are very cognizant of her high level of play.

Who is her favorite player? The usual, but besides their obvious skills, she also sees some unique qualities in Robert Sostre and Kathy Guinan. Robert’s “eyes dilate and move like a bird’s while playing” and Kim admires Kathy’s “court sense, dancing ponytail and smile.” Also up there is Bay Lui, who happens to be her husband. She loves the way he perfectly combines offense and the ability to retrieve almost every ball. A commonality among these players is their outstanding sportsmanship, a trait that Kim values highly. I asked Kim if she has played much with Bay as a partner and how did they get along? Her answer tells it all: “Are you kidding!” She qualifies this by saying “It’s not him, it’s me!,” furthering the observation that paddleball teams linked by blood or marriage, more often than not, don’t work well.

Speaking of sportsmanship, Kim is also an active participant in the PFA’s ongoing efforts to upgrade the overall conduct in the competitive game. She was involved in the development of the Code of Conduct and serves on the PFA Disciplinary Committee. At her recent tournament at Zerega, she implemented the player signoff on the COC, which is an important step forward in addressing the behavioral issues of the few players that are holding back the growth of the game.

Like the leaders of the PFA, Kim is passionate about growing the game. She feels that the best way to introduce the youth to the game is by continuing the efforts to draw in the many handball players in their late teens and early twenties. More and more she sees them picking up paddles, and staying with our game.

So that’s the paddleball life of Kim Avena. What about her real life would we like to know? Well, she considers herself to be a highly intuitive person, and she’s not talking about anticipating shots on the court. She says everyone has the power, but only a few are able to use it to advantage. Sounds like something we want to know more about!