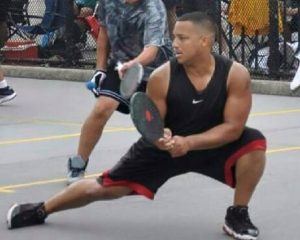 He is known for his shot-making artistry, quick reflexes and powerful game, as well as for his confrontational on-court behavior that sometimes has landed him in trouble with referees and tournament directors. Nelson Deida is the Paddleball version of the great Hall of Fame tennis player John McEnroe, from whom he says he learned his passion for the game. Nelson, you can’t be serious!

Nelson was born and raised in the Bronx into a Paddleball family – both his mother and father were good players. They introduced him to Paddleball at the age of five at the Yankee Stadium courts and he quickly fell in love with the game. “It was the combination of the speed of the game, its competitive nature, and also the family atmosphere that is very unique and wonderful.” After the stadium courts were demolished to build the new Yankee Stadium, Van Cortlandt Park became his home park.

Nelson continued to play with his Mom and Dad until the age of twelve. At eight, he competed in his first kids’ tournament. This was the era of the Budweiser tournaments and Nelson played with one of his parents in these classics through the age of fifteen. (“Minors” were otherwise prohibited.) He then began competing in tournaments across the tristate area and as his game developed, the Paddleball community quickly took notice of this skinny kid with the afro from Yankee Stadium/Van Cortlandt.

A left hander, Nelson is a fearless competitor with all the tools required of a great Paddleball player. His powerful overhand service motion is unique in Paddleball, with the biggest advantage being his ability to disguise its placement. Known for very quick reflexes and deft hands, he possesses a superior front wall game. He describes his game as “power, touch, passion, excitement.” Indeed, he is an artist on the court with one of the most exciting games to watch. His favorite shot is the drop-shot.

Nelson has now been playing Paddleball for 35 years. He stopped for about four years in total, due to the lack of tournaments and the emergence of one-wall racquetball. Back in the day, he played 4 to 5 times a week until his late 30s, and now he still plays at least twice a week. In the winter season his Paddleball home is Zerega Indoor. In the summer he does not have a home park, instead he travels to different parks in search of tough competition and to get together with his close friends.

Nelson said he was fortunate to grow up playing the game where he was exposed to many different players and he was able to learn from them. He particularly recalls J.C., a very knowledgeable player from Yankee Stadium, who called everyone “Fish.” He taught Nelson how to use his opposite hand and imparted this wisdom: “In order to be good at this game you have to be able to adapt on-the-spot by changing your approach mid-game. To do that you must learn from your mistakes and be able to play different ways.” Among the players Nelson studied were, of course, his parents, as well as Freddy Diaz, who taught him how to use his reflexes and hands. Anita Maldonado taught him to focus on his “tenacity, toughness, dedication and to practice, play hard and have fun.” Kathy Guinan showed him how to use his quick hands, helped with his positioning and maintaining focus. Anthony Fiorino was the model on positioning and playing defense. Craig Ruiz showed him how to use the power game to full advantage. Richard McKnight, who was an important mentor throughout the years, helped him develop the drop-shot. Sammy Cesareo was instrumental in him learning how to play smart, while Frank Savino showed him toughness, speed, diving and turning defense into offense. Brandon Fason was a model for hard and tough play. Sue Stephen helped him learn fundamentals and how to play smart. Richie Miller taught him how to go for it no matter what, and precision. Finally, Ritchie Gonzalez, most importantly, taught him how to play together as teammates and to have fun.

I asked Nelson what he thinks of the sport of Paddleball, “The game of Paddleball is a sport that is not easy, it’s tough and fun and a great sport to play.” I also asked, what is needed to take it to the next level? He says Paddleball has a solid foundation, but “what is needed for the sport to grow is exactly what Mike Melendez and the PFA are doing. Their approach is the right one by bringing in the youth with the kids’ clinics, raising their awareness of the sport and getting them interested in Paddleball. This is so important because Paddleball helped me stay out of trouble. We also need to showcase the sport like Mike and the PFA are doing with the PowPows.” Nelson believes obtaining sponsorship is key, as well as developing a ball that is viewable on television to increase exposure. His advice to his Paddleball peers is to continue supporting the game, have fun playing, and maintain that family atmosphere.

On the personal side, Nelson is married with four beautiful kids. In addition to Paddleball, he plays baseball and softball and a little handball. His sports hero is Bo Jackson. He also claims that he is a good dancer!