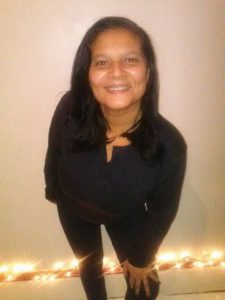 Although she has been playing big blue paddleball for only a year and a half, Miriam Silva has quickly climbed to the top of the women’s division and is a force to be reckoned with in the coming years! It’s remarkable that in this short amount of time she has already won six tournaments!

Miriam is an aggressive right handed player with that never-give-up determination. Her game is structured around taking immediate control of rallies with her powerful and consistent serve, her return of serve, as well as her forceful forehand and backhand strokes. In fact, Miriam’s forehand is considered to be one of the most powerful in the women’s game. She has all the shots in her arsenal – she can spike it, drop it, but by far, her power drive is her money shot. She can jam most of her opponents as very few women are capable of. Miriam is also deceptively quick on the court and has very good anticipation.

Like many paddleball players, Miriam started out playing handball and plays at a very high level – she is a certified ‘A’ player. She also is an excellent one-wall racquetball player. Miriam fell in love with paddleball after watching her dear friend Jewel Pacheco engaging in an intense doubles paddleball match at Central Park. It was with Jewel’s encouragement that she tried paddleball. From the outset, she realized that her aggressive style enabled her to make a perfect transition from racquetball and handball to paddleball. She said, “At present, I am passionate towards paddleball, as it strongly resembles handball, my original sport of choice.” During the winter months, she plays mostly weekends and in the summer, she plays as much as possible traveling to different parks looking for tough competition. Her paddleball home is Central Park.

On the personal side Miriam is a loving mother and grandmother. She LOVES to spend time with her sixteen year old son Jacob, who was diagnosed with autism. It is because of him that her passion shines through in her game. She is a talented lady, who can also crochet, is a great cook, and takes pride in being a wonderful mother and grandmother. Her favorite food is her daughter Jessica’s pasta and meat sauce.

Back to paddleball, she strongly feels that for the sport to grow, players must display good sportsmanship on the court. I asked her what she would like to change about the sport. She thinks increasing exposure is key for it to rise to the next level. Though she does not favor a specific paddleball player, she tries to emulate the style of the great superstar tennis player, Rafael Nadal, who is also her sports hero. She does have a peeve concerning paddleball: “Though there are paddles featured with the names of male competitors, there are no featured paddles with any FEMALE players on any of the signature brands. This, despite the fact that there are so many female players in the game today.” I could not agree more with you, Miriam! Paddleball manufacturers, the time has come to give the women players the recognition they have surely earned! They are one of the reasons the sport is on the rise! #MiriamAndTheLadiesGotNext!