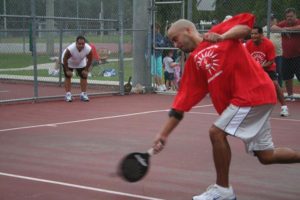 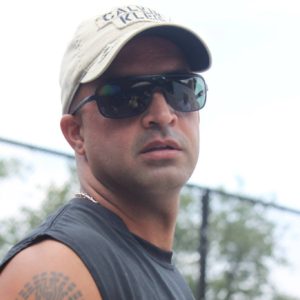 He is quiet and most of the time he wears a friendly smile on his face, but don’t let that fool you. On the court, he has the killer instinct of a lion. Carlito has proven himself to be one of the top players in the game today, with a vast arsenal of shots at his disposal. He can play a mean game of both small and big blue paddleball, as well as racquetball. When his game is “on,” he is a BEAST, hitting winners from any angle within the playing area of the court – “Carlito’s Way!”

Carlos Espinal was born in Brooklyn and has been playing paddleball since the age of eight. He started at the “6’s” park (also known as Bush Park) in Queens. His brother Ralph was his biggest influence and is the reason he started playing. Early on, Carlito frequently went to the park to watch his brother play and he quickly developed a love for paddleball. He watched many great players from whom he learned the game, including Gary Evans, Milton Pérez, José Guadalupe and Richie Miller. Later on, he gained much knowledge from Anthony Fiorino, Sammy Cesario, Robert Sostre, Donnie Ciaffone, Ramon “Papo” Padilla and lefty Ralph Badillo. But his brother, Ralph, who was a solid player himself, was always his paddleball role model. Eventually paddleball at the 6’s park ended and he and his friends moved on to Flushing Meadows, which became his home park. By the time he was fourteen, his game was strong enough to compete with the top players at Flushing, including Farley Figueroa, Miguel Mateo, Kevin Rolon and Godfrey Brown. At approximately age eighteen, another passion took over his sports life. He had become involved in playing baseball and softball, which conflicted with his weekend paddleball time, and his interest in paddleball waned.

After a 10 year hiatus from the sport, he returned to paddleball because he missed it and he wasn’t playing as much baseball/softball. During the summer, he split his playing time between Orchard beach in the Bronx and Juniper Park in Queens. In the winter season, he played at McFadden’s, Astoria Indoor and, of course, Zerega, the mecca of indoor paddleball, which eventually became his home court. There, he battles with some of the top players in the game.

Carlito’s game is power and he is one of the hardest hitters in the game today. He keeps his opponents on defense and overwhelms them with his drives. Carlito loves powering the serve low or high and then attacking the wall off his opponent’s return. His favorite shot is the spike or “Yonker.” He also has excellent control, is very physically fit and has one of the best cut/slices of the present day players. He said he learned this shot from Freddy “The Animal” Diaz, who was also his favorite player growing up and had “every shot in the book.”

Carlito loves the sport because of its competitiveness, power and speed. He has won his share of tournaments, but presently he is not enthusiastic about playing in tournaments because of all the bickering that goes on. He is pleased that the PFA and other tournament directors are working to fix this condition, but for now he’d rather get a group of players and “go beat each other up for a few hours.” He likes to play both small and big ball equally, as both games have their own challenges, which he very much enjoys. He also loves the great family atmosphere. He said, “Everyone in the paddleball community has been around for years and it is like family.”

On the personal side, his sport hero is Michael Jordan, “He had that killer instinct and knew how to execute.” His favorite food is a nice medium-rare rib-eye steak. He loves sports in general and has played handball, tennis, football, basketball, softball, baseball and table tennis.

What about the future of the paddleball game? He believes that for the game to grow, more exposure, sportsmanship and sponsorship is needed. “We need people with passion to push for those sponsors. People like Kathy Guinan, Mike Melendez and the others involved in the PFA.” Thank you Carlito! As far as changes in the sport, he would like to see independent, non-playing referees in tournament competition. “That would eliminate some of what, in my opinion, is the favoritism that exists to some degree.” His advice to his peers is “to play, compete, but also have fun doing it.” He said that for many years he played to win and didn’t always enjoy the game as much as he could have. “When you only play to win you forget how to have fun.” Carlito’s Way!