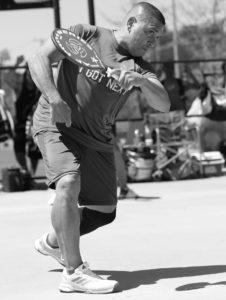 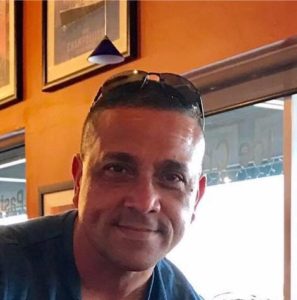 What does ADS stand for? I tried Googling it and found American Daffodil Society, All Day Sickness, After Dinner Speech, All Directional Shower and Automatic Dice Server. Actually there are over 100 listed, but nowhere to be found is “Ace Drop Shot.” Ray Sanchez claims this as his shot and coined the ADS acronym as a tribute to the shot’s greatness, and he even uses ADS as his moniker. I haven’t had the opportunity to see Ray play much, but Mike Melendez told me he’s never actually seen him successfully execute a drop shot (LOL)! How could that be, Mike? It’s his name! Well, Ray and Mike will have to settle this. Anyway, this is all part of Ray’s persona as the life of the paddleball party. He keeps everyone loose with his joking and clowning, while being a great friend to the paddleball community.

But Ray is more than a comedian at the courts, he is also very good player. He rates himself as a B to B plus player. He is a solid, tough competing lefty with power, quickness, a very effective serve and outstanding anticipation and positioning. His favorite shot is to the corner on either side. He plays both small and big ball and works hard at improving his game as he strives to advance in the ratings.

He learned the game hanging out at Zerega Indoor and watching some of the top players of the 80s, among them, Robert Sostre, Sammy Cesario, Frank Savino and Anthony Fiorino. He watched them in awe and when he was finally able to get on the court with them, “Wow! the rest is history!” In recent years, Nelson Deida, Andre Hopkins and Mike Melendez have been major influences. The Hop taught him to have a plan on every serve and Ray’s exposure to Mike’s overall “awesome game” has helped him advance as a player.

Ray has been playing for thirty years with a few gaps in between. He started in Van Cortlandt Park and still considers it his paddleball home. He also plays regularly at Zerega, Juniper Park and at the HES in Brooklyn. Ray is dedicated to the game and presently plays two to three times per week. He says, “I love the intensity and competitiveness of the game.”

Ray’s big contribution to paddleball goes well beyond his playing and the comedic relief he provides. He is a big supporter of the paddleball revival movement and in particular, the Paddleball Family Alliance and its mission of teaching the youth, upholding the rules of conduct, promoting respect among players and improving the refereeing through training. He continuously promotes tournaments and events, oftentimes with a touch of his brand of comedy. He has volunteered on many occasions at Mike’s kids clinics and has made several cash donations to support the cause. In his real life, he is involved in artwork and printing and helps Mike with the design of the promotional material, including the tee shirts, posters, etc.

Ray gave us a scare last summer at a tournament in Juniper Park. He became dehydrated and needed emergency medical treatment. Ray says he is fully recovered and is confident that the changes he has made to his fluid intake will prevent recurrences. He cautions the paddleball community to stay hydrated, especially in the hot weather.

What about Ray’s non-paddleball life? Ray has two sons, a daughter and two grandchildren. His livelihood focuses on print coordination, specializing in creative software and he is a master printer. He is a hard worker, always willing to try new things. Ray reveals that he has a secret talent: he does a mean imitation of Yoda from Star Wars (voice only!). His sports hero is Joe Montana and his favorite type of food is Mexican. Not surprisingly, he is very conscious of the needy, and has recently developed a soft spot in his heart for helping the homeless, as he is now getting involved in this great cause.

Ray’s message to the paddleball community: “I love playing paddleball. It is an excellent pastime of fun, a good workout and I am fond of the friends I have made along the way.” Ray, there is no doubt you have fun in the game! Now we just need to get the internet up to speed and recognize ADS!