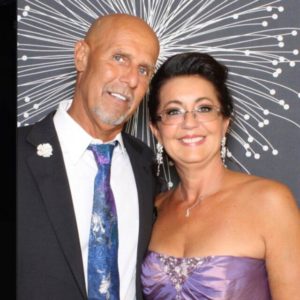 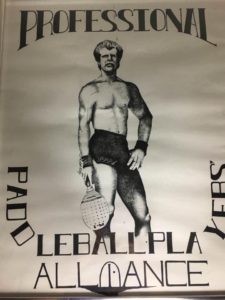 The decade of the 1980s marked the Golden Years of paddleball as the sport’s popularity skyrocketed across the five boroughs of New York. Many of the public parks were producing budding stars. At Bay 8th Street in Brooklyn a 16 year old kid named Donnie Ciaffone was attracting much attention and the word spread across the city. Donnie was gifted with superior athletic talent, chevalier social skills, and a unique, almost “rock star” presence. Yes! At Bay 8th Street the sport of paddleball was shaping its next star!

Donnie was born in Brooklyn and started playing paddleball at the age of 15 at a small park on Avenue S in Bensonhurst. Eventually he was looking for tougher competition and took his game to Bay 8th, which became his home park. Donnie recalls, “While coming up in the sport at Bay 8th a great legend named Caesar Polichetti took me under his wing and taught me discipline, technique and how to use my left hand. I then met another legend, Rochelle Weiner Martinez, who introduced me to the games played across the city.” Donnie became one of the best players at Bay 8th, his deadly game dominated by extraordinary power and incredible spikes. The spike was his favorite shot, which he hit to all angles of the court, but yet his game was guided by a smooth, graceful glide. He made the game look so easy.

Donnie took on all comers at Bay 8th for 15 years, while competing in tournaments across the tri-state area. Donnie and Rochelle teamed up for many tournaments and won several championships, including two Budweiser mixed doubles. Mixed doubles was closest to his heart and he loved playing with Rochelle and at times they were unstoppable. Donnie was also an early proponent of women’s equality in paddleball. Ray Gaston, the president of the Professional Paddleball Players Association, the organization of paddleball’s Glory Days, said, “Ciaffone was one of the first paddleball super-stars to actively lobby for greater women’s participation in the sport. In an era when women players were not taken as seriously as they are today, Donnie often challenged other male greats to play more mixed doubles. “Let’s hear it for the ladies!” was his cry. This stance, coupled with his dashing stature, earned him icon status and his image was incorporated into the PPPA logo.” Paddleball legend, Anita Maldonado said, “There are real marriages and then there are mixed doubles marriages in paddleball. One of those special unions was Donnie Ciaffone and Rochelle in the 1980s. They dominated one-wall mixed doubles like no other team. What makes a great mixed doubles team? The most important ingredient is an awesome player like Donnie Ciaffone. He was athletic, smart and he was hard hitter. He always fought for position and used his partner as a pick. His height enabled him to have the best spike in the game. When Donnie spiked the ball, he spiked it out of the park! He was tall, blonde and boy was he handsome! Although he was not as dominant in men’s doubles as he was in mixed, Donnie will go down as one of the best players of the 1980s!”

At the age of thirty, Donnie moved to the Bronx where his game matured as he faced fierce competition. Donnie recalls, “In the Bronx I was spanked and taught by players like Anthony Fiorino, Robert Cheilli, Ralph Capogrosso, Craig Ruiz, Bobby Fiorentino, Fernando Frias and Mike Melendez.” Speaking for myself, I teamed up with Donnie for a number of years and I can personally say he was humble and gentle by nature, but everyone knew when Donnie was in the park! Whether at an elite private beach club against other top ranked players or in a local urban tough neighborhood park against lower-level ranked players, it didn’t matter, the man was there to play!

Present day, Donnie lives in Florida and plays about twice a month at Hollywood Park. He would like to play more, but like many of us, the game he played for so many years has resulted in his body taking a beating, and it has taken its toll. “After spinal surgery, and having both knees replaced, my paddleball game just isn’t what it used to be.” He has taken up pickleball, which is the sport he now mostly plays because it’s much easier on his body.

On the personal side, Donnie has this to say about his life today: “I live with my wonderful, beautiful wife Neda. She is my world. I love to play pickleball and I love to fish. Living in Florida makes this very accessible to me. As far as food goes, I’m a meat and potatoes guy and I love an occasional martini. Most of us think that it’s all about winning, but it’s not. The friendships, the physical exercise and family union are what’s most important.”

How does Donnie feel about the paddleball game today? “I think paddleball has grown in diversity with the different balls that are presently played. I love the fact that there are now young players in the game and what the Paddleball Family Alliance is doing with the clinics is remarkable. Thank you Mike for that. My advice to young players is to pace yourself and to play only when you’re healthy. I have seen what can happen first-hand by overplaying. I believe paddleball is on the right track and I wish it would spread nationally.”

“When we consider One Wall “Legends,” few in paddleball come larger than Donnie Ciaffone!” – Ray Gaston