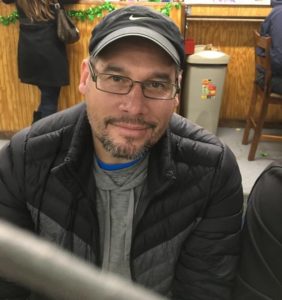 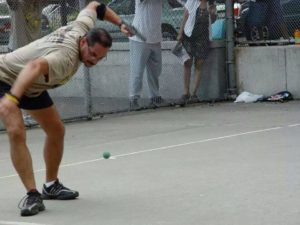 Tony has been playing ball since he was 17 years old.  Born and raised in the Bronx, he started playing handball before transitioning to paddle and racquet, although he still prefers small-ball paddleball.  A skilled lefty player, but beware of his right hand too!!

Tony’s love for the sport had him traveling around the city to get games – from his early days at Yankee Stadium to Carmine Street, from Zerega to McFadden’s, from Roy Wilkins to 40th Street, from Van Cortlandt Park to People’s Park and Orchard Beach to Red Hook – there was never a lack of games.  These days he considers Van Cortlandt his home park, although he spends many weekends with his family at Orchard Beach.  What he considers his only vice, paddle is his therapy, playing 5–6 times a week, he can recount many a late night playing until the sun came up.

Tony takes a minimalist approach to the game – keep the points short and minimize mistakes. On defense, he tries to keep the play going until he can get a set-up to make an offensive shot. His favorite shot is his low serve, which he has worked on for a long time.  The advice he would give to his fellow paddleball players would be to stay focused and play to your strengths.  Persevere and be confident that you’ll always have the advantage because you can adjust your game better than your opponent can.

There are many players that Tony admires, but two in particular that he tries to take something from their games are Eddie “Flaco” Rodriguez and Freddy “The Animal” Diaz, great closer!  Tony’s favorite athlete is Roberto Clemente, calling him “a great athlete who played with Grace and Great Passion.”

When asked what he would change about the sport, Tony confesses there are a lot of veteran players that play the game but don’t know the game – he would encourage everyone to get a better UNDERSTANDING of the rules the PFA put together and publishes on a weekly basis. Tony says he has no secret talents, but anyone who really knows him, knows he has a wicked sense of humor.

His love for the game has not diminished over the years despite a double knee replacement just three years ago.  He has happily passed down his passion to his son, Anthony – kudos to the Paddleball Family Alliance (Mike Melendez, Kathy, Marcelo, Mitch and so many others) for teaching and mentoring our kids. So look out for who’s got next!!