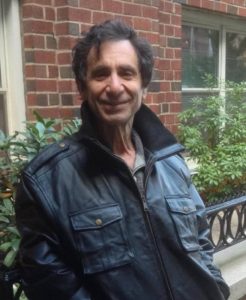 The Poker Game By Michael Leiman

The competition at the five paddleball courts off Carmine Street in Manhattan was ferocious. No one wanted to lose and all of us fought like mad, yelled like mad, disputed calls like mad, to avoid it. But, in the end, one team got to 15 before the other. The winner stayed on. The loser trudged to the sidelines to await their next chance.

And wait. And sometimes wait some more. The courts were not just ferocious. They were crowded. Sometimes the waits extended to ten games. And waiting was not something we were good at. We were competitive athletes and wanted to do something. Well, there was a bocce area behind the courts if you wanted to roll a ball. And there was a small softball field where you could kick a soccer ball. Or you could go to the store and get something to drink.

Billy Abolafia did none of those things. Billy was one of the characters at Carmine Street. Tall, powerfully built, with long, curly hair, he was a charismatic figure that drew people to him. He was also a gambler. He brought his cards and set up a poker game on the cement tables and wooden benches just a few feet beyond the courts. Losing players came to join in. I came to join in.

The game was quarter/half. Open for a quarter with three raises allowed. If someone showed a pair the betting began at 50 cents. Not a small amount of money in the late 1980s, but limited enough that no one could get badly hurt. Just a few dollars would change hands. Then Billy suggested that the very last bet go to a dollar. Hmmm, a dollar bet followed by three raises, that would make $4 on just one card. Hey, the game was getting interesting! Too interesting, that is, too remain at an outdoor table with strangers now watching with players that came and went whenever their turn on the courts came up, with dollar bills flying around and being blown by the wind. We took the game indoors. To the apartment on the far West Side that Billy shared with his girlfriend. Now the poker game wasn’t interrupted by anything. We’d play for hours; sometimes all night.

Thing had become serious. We were, after all, serious competitors. The quarters and half dollars disappeared. Now the game was $1/$2. At Billy’s suggestion, the final bet became $5, then $10. Raise that three times and…now we were talking REAL money!

We mostly played a silly game, however, Baseball. Baseball was generally a 7 card stud game…2 closed cards followed by 4 open cards with a bet on each one and concluding with one final card. Threes and nines were wild. An open four got you another card. Crazy! In my first night of playing I couldn’t figure out what a likely winning hand was.  Until I did!

No way you could win with less than four jacks. You couldn’t feel confident with less than four aces. I built my strategy around that insight. I’d drop out early if it seemed improbable that my hand would be that good. I’d save my big money bets for the times my cards were likely winners. Billy was still the best player at the table but now I had a clear insight into the game.

Two things kept most everyone else from developing the same clarity. All our players came from Carmine Street, but not all of them were paddleball players. Two of them were the court’s drug dealers. Now call me naive, but I didn’t know we had drug dealers. But, apparently, we did. And they were nice guys. They brought their “product” to the table and it was free for anyone who wanted it. As was the beer. I partook of nothing. That gave me an awfully big advantage.

And then Anita Maldonado joined the game! I love Anita. She is an exciting, fun person who was also the reigning woman’s singles and doubles champion. She was among the fiercest competitors I’ve ever met. No lead over her was ever safe. She didn’t (and likely still doesn’t) know the meaning of give up. Her oft stated motto: “You’ve got to be in it to win it.” A GREAT attitude in sports. NOT a good one in poker where “you’ve got to know when to hold em, know when to fold em.” Leave a likely losing hand early and you drop a few bucks. Fight an unwinnable battle to the end and you can lose a lot! Anita, the drug dealers and a few others often fought to the bitter end.

My philosophy was different. Play sober, play conservative and go in big when I recognized my cards were likely the winner. The drug dealers brought lots of cash and they didn’t seem to mind when they lost it. They just seemed puzzled when their hands were nowhere close to what the winners held. To cheer them up I’d smile and remind them: “You’ve got to be in it to win it.” No matter their probability of winning, they remained in it!

In one memorable hand I was fighting it out with Anita. I held a couple of wild cards and bet strong. Anita, who didn’t seem to have much, stayed with me and then, towards the end, raised aggressively. My reading of the hand was that I was almost the sure winner but Anita’s strong bets scared me. I backed off, merely calling her at the end.

“What do you have?” I asked nervously.

“Aces?” I responded, incredulously. Maybe I’d heard wrong. “You have a pair of aces?”

“Four kings,” I replied, pulling in all the chips. Wow!

My gosh, how could she have stayed in with aces? A game with a million wild cards and you’re in with aces? And then of course I remembered: “You’ve got to be in it to win it.”

And that’s how, though I did not win all the time at Carmine I certainly did at Billy’s!

The losing, however, was not good for the drug dealers. One of them, Larry, called and asked me for a $1000 loan to help him buy “product.” He’d pay me back in a week along with an extra hundred. I declined. I’d turned my back on the opportunity to get into the drug racket!

The game went on without the out of funds drug dealers, but it had grown crazy. Somehow the allowable bet on the last card had morphed to $100. Three raises could bring that to $400. None of us could afford that kind of money. One night I won close to $1000 but went home with $125 and a pocketful of IOUs.

A non-Carmine Street guy joined the game. His name was Mike. His nickname was Psycho. Psycho Mike. I soon discovered why. When he learned that I was a psychotherapist he accused me of cheating by reading people’s minds. I learned from Billy that Psycho Mike generally carried a gun. I did the math: Big money, cocaine, a weapon and paranoia added to a combination I didn’t want to deal with.

The Poker Game was over for me!