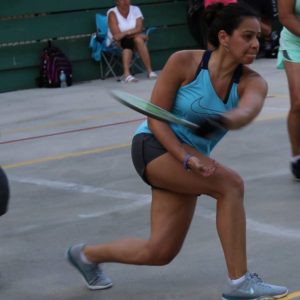 Omaris Journet has a big smile and an easy laugh. But don’t let that fool you! She is a dynamic left-handed competitor, always striving for perfection on the paddleball courts. Amazingly, she has been playing Big Blue for just over a year and is already one of the top female players in the game, never afraid to scrape a knee diving to get her shot. However, for Omaris her success in paddleball is not a surprise. Once she decides to do something, she expects nothing but the best from herself. She is a natural athlete and combined with her dedication, the sport comes easily for her.

On most weekends Omaris, also called Omi by her friends, drives down from Connecticut to play at her summer paddleball home of Orchard Beach or Zerega during the indoor season. Omaris has been playing racquetball for the last 11 years, but like many players over the past year, she has transitioned to the Big Blue game.  She enjoys the sport of paddleball as a good cardio workout that’s good for all ages and provides a great sense of community/family.

There isn’t a player she models herself after, preferring to develop her own game. In describing her game, Omaris says she is not sure if she has developed her own style of play yet, but she likes a deep court shot and a chest shot. Her goal is to be consistent whenever she steps on the court. One player she enjoys watching and playing against is Miriam Silva. She says, “I do enjoy watching and playing against Miriam as I think she is a great player and she brings out the best in me.”

We asked Omaris what she thinks is needed to grow the sport and her response was, “I think the sport needs a lot more exposure (nationally). Our youth needs to be recruited to the sport in order for it to grow, and getting younger players sponsored will also help. Having conversations with racquet/paddle brands such as Gearbox and teaming up with them to host tournaments or jump in with the racquetball tourneys throughout the country would also help. Paddleball needs more money. Consider what handball has done to grow the sport: more money = more people = younger players = Bigger Sport! Handball players are great athletes that can help paddleball grow, as they have shown that the transition into paddle for them is pretty easy. But there has to be an incentive and for them; it’s money!”

Omaris has this advice for her fellow players “Do not let this game define you because this is not what you’ll be remembered for. Your legacy will be who you are and what you do off the court.”

Omaris’ athleticism is on display in the many other sports she participates in. She is a very good volleyball player, swimmer, softball player, and snowboarder. She also really enjoys playing table tennis, which gives her the good hands she possesses on the paddleball courts. One of her goals is participating in a triathlon before she reaches the age of 50.

Her interests outside of sports include her love of dogs; her favorite food is a good Vianda con gazpacho and she can play a mean clarinet.

Omaris Journet is quite a well-rounded person and athlete, and one of the up-and-coming stars of the paddleball game. This writer urges you to watch this dynamic lefty on the courts!