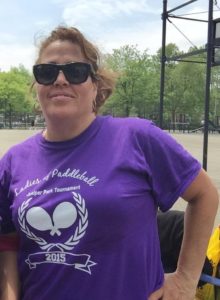 Maria Serrano is now making paddleball history. Not only is she the first player to have a profile written about her by the PFA, she is the first to earn a profile “do-over.” In her first mini-bio we learned that she is a top female righty player from Far Rockaway with a great attitude, supports and loves the sport and always smiles. Since this landmark profile, the program has evolved and now there is so much more the paddleball community craves to know about Maria. When the people demand, the PFA delivers. Here is Maria Serrano II:

It all started a long time ago when ten-year-old Maria was summer vacationing with her older brother Frankie in Woodmere. She followed him everywhere, including to the paddleball courts where he played, and she got to see The Game for the first time. It was love at first sight! He played with that famous heavy piece of lumber, known as the “Black Beauty” and Maria took it home with her. She started playing with it at the Rockaway Beach playground across the street from where she lived. She just kept going and going and her game quickly developed. It was the late 90’s and she could not be pried away from the courts, playing nearly every day during this booming time for paddleball. She soon became one of the top woman players in the game.

She competed with and learned from some of the best players in paddleball including Andre Hopkins (Hoppy) and George (The Hammer). The latter helped her greatly in developing her game. Because of this exposure to excellent players, she is never afraid to get on the court with anyone. Maria is very energetic and is a fierce competitor. She loves the low shots, her best is the short-hop left corner roller, which has earned her the moniker the “Low Shot Killer.” Maria also uses her intelligence on the court. She says “It’s not about who’s the best, it’s about playing smart and thinking where to place the ball.” It’s also noteworthy that unlike most of the woman players of today who opt for big-blue, Maria regularly plays small-ball paddleball. During the indoor season, she is a semi-regular at the HES in Brooklyn, competing and holding her own with mostly very good men players. She is known for playing steady, her two good hands and her ability to hang in against hard-hitting offensive players. She knows when it’s the right time to go for her shot and she usually makes it. Win or lose, because of her high level of play, constant smile and good sportspersonship , everyone has a good time in her games.

As you might suspect, Maria has a high regard for the sport of paddleball and certainly does her part to promote the game. She is very well liked amongst her peers and this has helped her become a paddleball leader at Rockaway, coordinating PowPows and tournaments. Mike Melendez calls her the Rockaway Queen!

Maria would love to see the sport grow and feels that one of the important ways is to welcome anyone who shows an interest in the game. She encourages her peers to play with them and to be patient. She especially looks to recruit handball players, telling everyone she sees to try the paddle and literally puts it in their hand. She says that is often all it takes. “They will never put it down.” Also, her outcry is to get the kids involved, get them off the electronic games and into paddleball. And of course, more sponsors are needed, which will certainly help create excitement. We asked her who is her favorite player, and though she didn’t single out anyone, she highlighted Anita Maldonado, Kathy Guinan, Robert Sostre and Mike M. as players she loves watching. As a testament to how much Maria loves the game, she is the only person in this profile program who, when asked if there is anything they would change about the game, simply said, “No.”

Maria has three children, ages 28, 26 and 25, none of whom play paddleball. Her son though, gets great pleasure when Mom comes home with paddleball trophies. One such trophy was won last year at the second Annual PFA Big Ball Mixed Doubles tournament where she and Mike placed third. She also has won or placed in Bethpage, Juniper Park, Van Cortlandt, and Bay 8th. Her three siblings, Eddie, Bianca and Frankie all played the game back in the 70’s. Frankie Soto, nicknamed Papo, who we mentioned introduced her to the game, sadly has passed away. She knows he would be proud of her now. Her husband Ruben was into motor sports when he wasn’t working hard to support the family (while Maria played ball, LOL). She says that despite him hardly playing, she could never ever beat him! She thinks it may be because she sometimes bested him in dirt bike races and he just couldn’t allow his high school sweetheart to beat him in paddleball too. Maria also plays handball, volleyball and, by her own account, can bowl a mean game. Her sports hero is (of course) Serena Williams, a woman who possesses the same fiery competitive spirit as Maria.